BY rangefinderyardstaff  Posted In Hunting

Buyers Guide and Reviews for the Best Rifle Scopes

As an Amazon Associate I earn from qualifying purchases.

Our Full Affiliate Disclosure can be found here

What is the Difference Between a Golf and Hunting Rangefinder

How Does a Rangefinder Work?

Halo Rangefinders Reviews – The best For 2020

No matter your experience in the field, finding the right digital rifle scope will prove to be beneficial. Despite the desire to remain faithful to the old iron sights, the temptation must be broken. The simplicity of a digital rifle scope and the many advantages of having one are worth the price.

But the questions are, “How do I choose the right scope?” and, “What specifically should I be looking for in my search?” Those of you who have a bit of experience under your belt may be able to sort through the magnification specifications and the terminology to find just the right scope.

However, having a little help along the way may be just what you need for many of you. Terminology such as angle compensation, eye relief, objective eye lens, light transmission, and more may seem like a foreign language.

At the same time, developing an understanding of these concepts and attributing them to your specific area of need will be essential in order to acquire the proper piece of equipment.

Throughout this article, you will encounter ten of the best rifle scopes on the market. They will be reviewed and assessed for you, as well. Along with this, you will be aided in developing your understanding of how to choose properly from among the many options on the market.

Finally, at the end of the article, I will leave you with my personal recommendation. 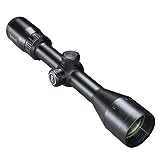 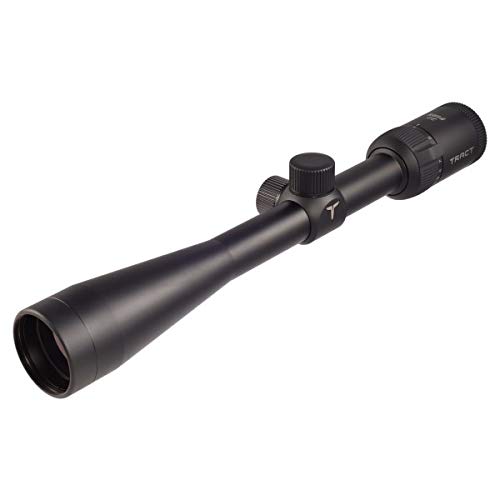 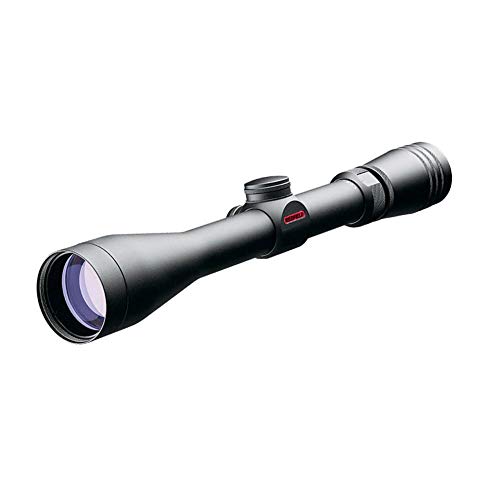 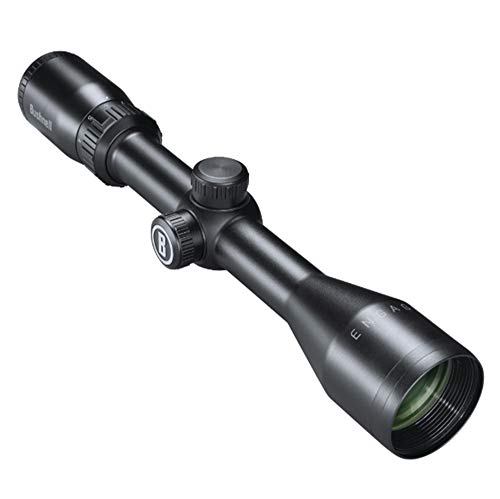 At the outset, this is a wonderful option for a scope. Many people go astray in choosing a rifle scope when they think “big” rather than “small.”

However, the lower range of magnification (the 3 rather than the 9) will actually prove to be more beneficial. In choosing a scope, one must pay closer attention to the lower range abilities instead of the high.

Here is a lightweight piece of equipment that will surely satisfy those who love long-range hunting. The Tract 22 FIRE 4-12X40 Rimfire Scope has 4-12x magnification abilities.

Once again, it is important to note that it can only be used at a minimum of 4x magnification. Therefore, in close quarters (i.e., dense brush where acquiring a target may be within 100 meters), it will possibly make for a difficult shot.

However, in the open field where a target may be around 300 meters or so out, the magnification ability may come in handy. Tract feels confident about its product and promises a lifetime warranty along with the purchase for no added charge.

A scope transmits light to the user’s eye, thus creating an illuminated line of sight. This will prove to be important for those of you who enjoy hunting around dusk or dawn. Heightened magnifications will decrease illumination, while large objective lenses will increase illumination.

The Redfield Revolution 4-12x40mm Riflescope with 4-Plex Reticle also allows its user to adjust for elevation and wind. This will be explained later in greater detail in the Buyer’s Guide. 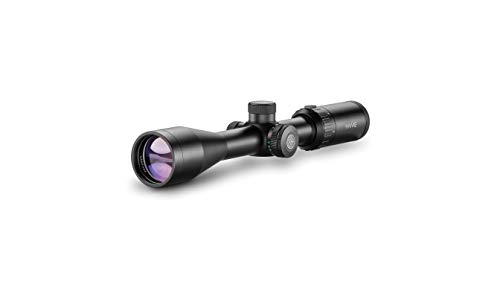 The reticle of this scope is designed with multiple small reticles along the horizontal line of the main reticle.

Each small reticle is easily distinguished from the next, and along the side of each one are the various yards at which the reticle will operate properly. As many of you know, when a target gets further away, aiming is not as simple as putting the reticles on your target.

Generally speaking, you will only lift your rifle up, not turn it to the left or right. The HAWKE Sport Optics 14222 Vantage IR 3-9x40 Riflescope aids its user if you know the distance of your target. If the target is 100 yards away, you can simply lift your rifle and put the 100-yard reticle on your target. 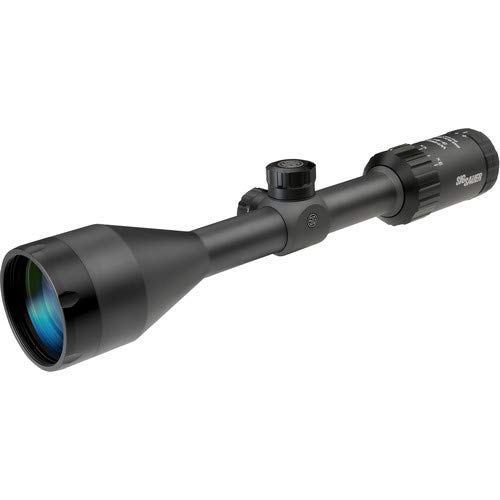 This piece of equipment stands out from the others on this list for its 50mm objective lens. Generally speaking, the larger the objective lens, the greater the illumination.

However, there are times in which this may not be needed, nor is it practical to buy a scope with such a large objective lens. These scopes have a tendency to sell, as the illumination ability is easily marketable.

Nevertheless, the illumination comes at a price. This kind of scope is typically less comfortable than a scope with a smaller lens and thus has a tendency to be more difficult to use. This topic will be addressed later in the Buyer’s Guide. 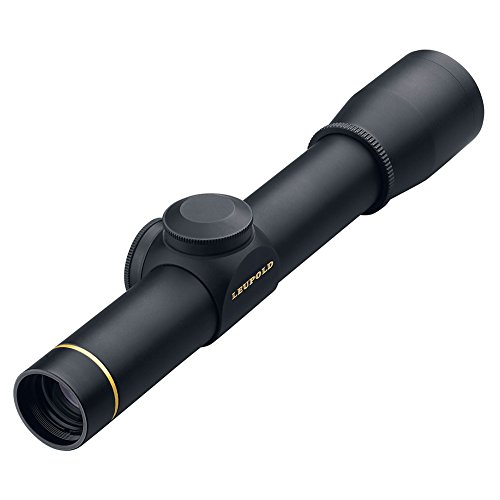 Leupold FX-II is another unique item on this list. This Leupold scope comes with a fixed magnification of 2.5x. As a result, this scope will not be for everybody.

If you know for certain that you will be hunting in thick woods and brush, this may be a good fit for you. If you enjoy squirrel hunting, this also may be a good fit. However, if you are in the market for increased magnification potential, this will not be what you are looking for.

Compared to the Leupold FX-II, this scope can be purchased for over $100 less. If you are in the market for an affordable scope, this may be the one for you.

Another great benefit of this item is its simplicity. The ballistic plex reticle does not come with bells and whistles, but its strength is found in its ease of use.

This is also another piece of equipment that is backed by a large number of satisfied customers. The sleek black design will look good on any rifle. The 3-9x 40mm capabilities are also ideal for most situations in the field.

The Vortex Optics Crossfire II has a 2-7x 32mm magnification range and objective lens. This is an ideal piece of equipment for anyone who knows he will use it in thick woods.

In some of the western states, where long distance hunting is more of a norm, this device will not satisfy. The 32mm objective lens is smaller than others, and thus it will not have strong illumination capabilities. However, it is a piece of equipment that will be easy to use.

The 60 MOA capabilities (minutes of angle) on this scope mean that its user will have a large number of adjusting options. 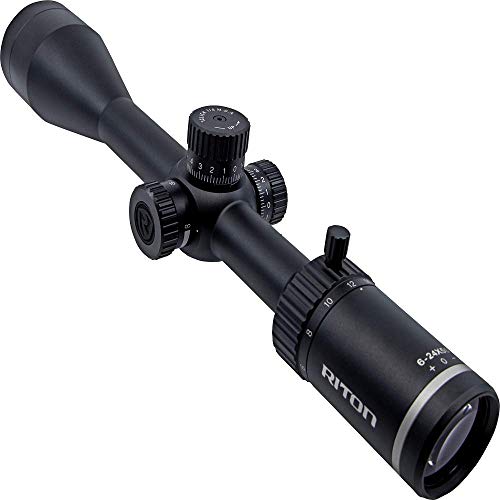 This is a relatively unique buying option on this list, as well. With the 6-24x ability, the magnification range of this item is geared more for the open range than for dense woods.

In actuality, this scope would be a foolish purchase for deep-woods hunters and should be avoided. However, the up-to-24x capability of this scope will prove to be a great asset for long-range hunters.

The question that you need to ask yourself is, “What is the capability of my rifle?” This scope is not for the average rifle. Rather, it would work well with a long-range rifle. If your rifle maxes out around 500 meters, this is not a good choice for you. 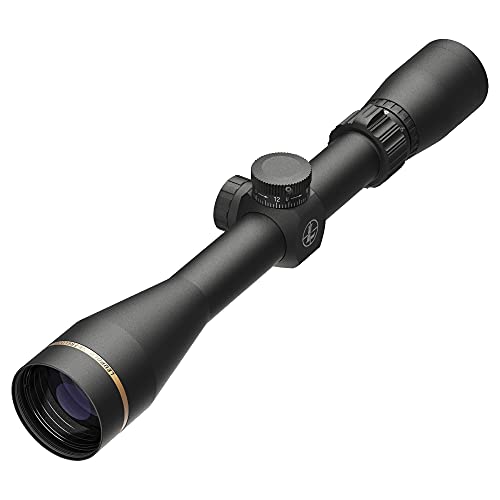 Here is another Leupold brand scope that will be certain to impress. A great benefit of this item is that it comes with a full lifetime guarantee.

The eye relief is good but also not the best. Nevertheless, it should satisfy its owner, as it comes in at 4.2 and 3.7 inches. The Tri-Moa reticle will allow its owner to use the upper half of the sight to locate the target while also using the advanced reticle display to aim properly.

This device is of good quality but is also one of the more expensive buying options on our list. It is backed with good customer reviews, although there are not as many as some of the other pieces of equipment already discussed have.

So here we are. What do we make of all this? It would seem that there are some specifications that are often repeated, while at the same time, there are some that are not. Terms such as turrets, windage, elevation, eye relief, objective lens, and so forth have been used throughout this article.

I will attempt to break down these concepts in brief and move quickly to my final thoughts.

The turrets consist of windage and elevation adjustments. This can be thought of as a sort of manual angle compensation. If the wind is blowing strongly or the curvature of the earth needs to be factored in, simply turn the appropriate dial.

The turrets should ideally be capped or fixed in place and not easily manipulated in the event that they get snagged on brush or something of the sort. This is also where the term MOA finds its place.

When looking downrange through your scope, you will notice that this can only be done well at a certain distance. The term used to describe this is “eye relief.” Some of the scopes on our list have somewhere between 3.5-4.5 inches of eye relief.

If this is stated, what this means is that beyond that distance, you will not be able to see through your scope properly. Therefore, increased eye relief is desirable. It makes for an easier shot and added comfort.

Have you ever looked through binoculars before? What about at an object that is close to you rather than far away? I would imagine that if you have, things looked weird rather than clear. Locating whatever it is you were looking for would actually have been harder, not easier.

As an example, we can evaluate a scope that makes the claim that it is a 2-7x scope. The 2 is the lowest it will go, and the 7 is the highest it will go. The bottom range, the 2, represents whatever is within the scope as being seen 2 times closer than it would appear without the scope.

On the other hand, when looking down the scope if it were adjusted to 7 times magnification, you would see everything 7 times closer than it would normally be seen. It will be important for you to know your terrain and to choose accordingly.

My top pick is the Bushnell Engage Riflescope 3-9x40 RE3940BS9 (paid link) . It is a 3-9x magnification scope, and the lower end of the range grabs my attention more than the higher.

This scope will be optimal for deer hunting and will be a diverse option for both the deep woods and the open range. Along with this, I like the capped turrets and the six illumination settings. In addition, this device will be easy to use and will sit well on the top of a rifle.

Bushnell has been around since 1948, providing high-quality products. If you are in the market for a scope, look no further than the Bushnell Engage Riflescope 3-9x40.

What is the Difference Between a Golf and Hunting Rangefinder

Please log in again. The login page will open in a new tab. After logging in you can close it and return to this page.